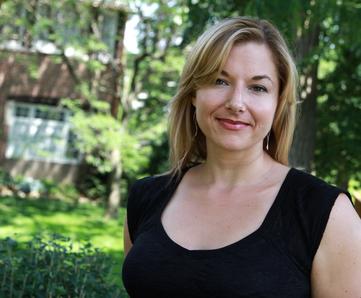 Marin Heinritz is Associate Professor of Journalism and English at Kalamazoo College, where she has taught since 2003. She teaches news writing, feature writing, food and travel writing, arts journalism, introduction to creative writing, creative nonfiction, advanced nonfiction workshop as well as seminars on creativity and embodiment in writing. She also directed the Writing Center at Kalamazoo College from 2003-2011.

Marin earned a B.A. in Philosophy from Kalamazoo College, a Master’s of Science in Journalism from Boston University, and a Doctorate in Creative Writing from Western Michigan University.

In addition to teaching college students full time, Marin has coached middle school and high school students on improving their writing and preparing for college-level work; she has offered poetry classes in nursing homes and homeless shelters; and she has led workshops and retreats connecting writing and yoga throughout Michigan.

She has worked on staff at newspapers and magazines across the country, including Mother Jones Magazine, Boston Review, The Pennsylvania Law Weekly, and Third Coast. Marin has freelanced widely, as an editor and proofreader, as well as written profiles, features, live performance reviews, essays, memoir, and poems that have appeared in various publications. Marin is completing a memoir about her own experience with childhood cancer, her mother’s death, and becoming a woman through illness and grief. Whether the subject is theater, dance, food, artists, memory, illness, the mother and child bond, spirituality, or gender and sexuality, the thread of embodiment runs through her writing in every form and genre.

Marin has been a lifelong writer and practitioner of yoga, introduced to them by her parents at a young age. She pursued formal education in both, most recently as a student of Karina Ayn Mirsky at the Sangha Yoga Institute where she earned her 500-hour certification in the style of Tantric Hatha Yoga and Meditation. She is a member of Yoga Alliance, teaches regular group classes at the Kalamazoo Barre studio and Upaya Yoga for Sangha Yoga, teaches special event classes and beach yoga on Lake Michigan through Satya Yoga in Saugatuck, and offers group and private sessions in Kalamazoo.

With the skills she’s acquired over decades of practice, training, and teaching, Marin aims to integrate writing and yoga in a seamless and purposeful way to help others develop a habit of discovery, stay curious about themselves and the world, manifest their true hearts’ desires, fulfill their highest creative potential, heal themselves, and make a meaningful impact in the world.